Mission to Turin: Visit to the "Fondo Kahle" and first working session at the Egyptian Museum 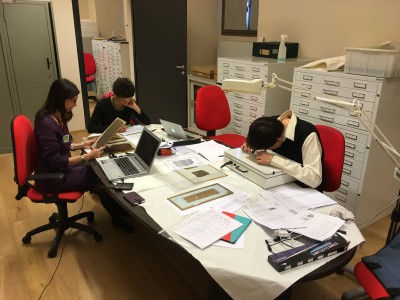 From 11 to 13 April 2017 Paola Buzi, Agostino Soldati and Maria Chiara Giorda have visited the "Fondo Kahle" and worked at the Coptic manuscripts preserved in the Egyptian Museum, Turin.

The papers of Paul Kahle jr are preserved among the documents of the ‘Fondo Paul Kahle’ hosted in the Biblioteca di Orientalistica of the Dipartimento di Studi Umanistici, Università degli Studi di Torino. The sample examination of some envelopes belonging to the archive has highlighted the unexpected presence of items pertaining to Crum’s epistolary. In a folder among annotated proofs of Kahles’s Coptic texts from Deir el-Balaʾizah, Upper Egypt, we have found two cards sent to Crum by A. Hebbelynck and E.O. Winstedt, respectively. Both bear interesting philological remarks.

In the papyrotheca of the Museo Egizio we have been carried out an in-depth codicological analysis of the Coptic Codices I-VI belonging to the monastic library of Tin/Thi(ni)s (7th-8th cent. CE). Moreover, by means of an exam of the mostly unpublished Greek and Coptic documentary texts held in the Turinese collection, we could ascertain, that some private Greek and Coptic letters and accounts dating back to the early Islamic period hail from a Memphite milieu. During our work we could count on the kind and professional collaboration of Dr. Alessia Fassone and Dr. Susanne Töpfer.