Mission to London and Oxford: Visit to the archives and collections of the Griffith Institute, the British Museum, the Petrie Museum, and the British Library 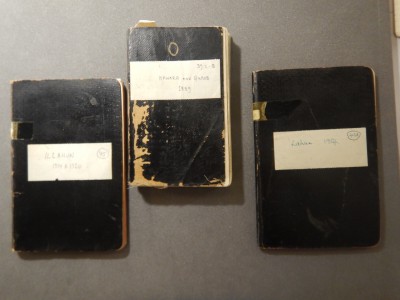 From 24 to 29 April 2017, Paola Buzi has visited, in London and Oxford, several institutions preserving Coptic manuscripts and archives related to the explorations of late antique Egyptian sites. In the Griffith Institute (Oxford), she has examined papers and documents belonging to W.E. Crum (Notebook 67), P. Khale jr. (particularly interesting his correspondence with other Coptologists), and W.M.F. Petrie (several notebooks concerning different excavation campaigns).

In the Petrie Museum (London) she could analyze Petrie’s notebooks concerning the excavations of el-Lahun, Oxyrhynchus, Deir el-Balaizah, and Koptos.

In the British Museum, thanks to the generous collaboration of Dr. Elisabeth R. O’Connell, Assistant Keeper (Curator), Dept of Ancient Egypt and Sudan, and external scientific collaborator of PAThs, she could study the Coptic manuscripts that are still preserved in the British Museum. This was also the occasion to discuss the structure of the PAThs database dedicate to places, which will constitute the skeleton for the Atlas of Coptic Literature.

Lastly, in the British Library (London) she could carry out an autoptic study of a selection of Coptic literary manuscripts.