Mission to Egypt (Alexandria, the Mediterranean Coast and the Delta): second topographical survey of the sites related to the Late Antique Period 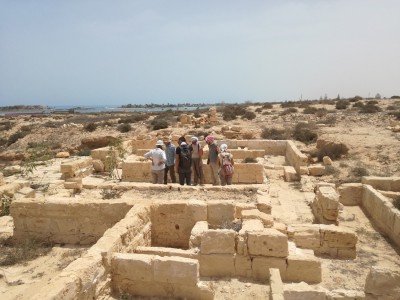 Paola Buzi, Julian Bogdani, Angelo Colonna and Ilaria Rossetti took part in the second mission to Egypt (Alexandria, the Mediterranean Coast and the Delta) destined to check and integrate data of archaeological sites  related to the Late Antique Period and, more in general, to Christian communities which re-used pharaonic structures or built new settlements. Particular attention was devoted to former episcopal sees and monastic settlements.

Old and recent archaeological reports have been used as a guide to verify what of these Christian settlements is still visible. Several active excavations (Kom el Dikka, Buto, Marina el Alamein) have been visited, thanks to the collaboration of colleagues of other universities.

The numerous necropoleis of Alexandria, Abu Mina, Kellia, Nitria, Sais, Xois, Taposiris Magna, Marea, and Marina el Alamein are some of the sites that have been analysed, also to verify  their state of preservation since, as is well known, the archaeological sites in the Delta are often in a precarious situation.

The results of this second mission are extremely valuable for the construction of the Digital Atlas of Coptic Literature, that is the main scientific "product" of PAThs.