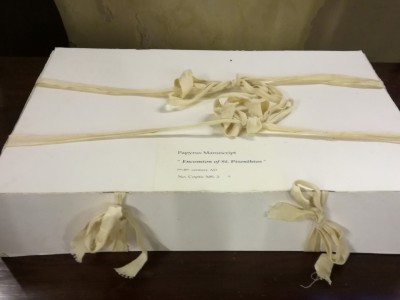 Paola Buzi visited the manuscript collection of the Coptic Museum (Cairo) in order to study the codicological features of the three Theban codices found in 2005 by a Polish Mission directed by Tomasz Górecki in the hermitage MMA 1152, which originally was a Middle Kingdom tomb.

The three codices (2 papyrus codices and 1 parchment codex) contain respectively the Canons of the Pseudo-Basil, the Encomium of Pisenthius and the book of Isaiah (with two leave of the Acta Petri).

The mission was made possible thanks to the kind support of the Director of the Polish Centre for Mediterranean Archaeology, Artur Obłuski, and his staff, and the permissions of the Egyptian  Ministery of Antiquities.

On the same occasion, also some manuscripts from Antinoopolis have been studied.